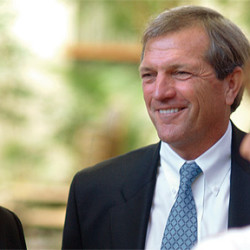 Mark DeSaulnier was sworn-in to the 114th Congress in 2015.   He represents California’s 11th Congressional  District which includes the western, central and southern areas of Contra Costa County.  He currently serves on the Education and Workforce Committee, and the Committee on Oversight & Government Reform’s subcommittee on Transportation and Public Assets.

DeSaulnier has served at the local level on the Concord City Council, as Mayor of Concord and as a three term Contra Costa County Supervisor.  As Supervisor, he served on the California Air Resources Board, the Association of Bay Area Governments, the Bay Area Air Quality Management District, and the Metropolitan Transportation Commission. He was elected to the State Assembly in 2006 where he served one term and received the distinction of being the first freshman in history to chair the Assembly Transportation Committee.  DeSaulnier was elected to two terms in the California State Senate in 2008 and 2012.

In the Senate, DeSaulnier chaired the Transportation and Housing Committee.  Earlier, he chaired the Senate Labor and Industrial Relations Committee and the Subcommittee No. 3 of Budget and Fiscal Review Committee pertaining to Health and Human Service. In addition, he served on the Senate Committees on Health; Energy, Utilities & Communications; Governance & Finance; Insurance as well as the Joint Legislative Audit Committee.

In his time in office, he has taken a leadership role on a variety of key issues including government reform, labor, transportation, the environment, health care, local government, and public safety. In the Senate, DeSaulnier’s top legislative priorities included:  working to reform state governance; safe and efficient roads and highways; allowing companies to organize as more community-active corporate citizens; protecting public health; reducing Californians’ exposure to tobacco; protecting homeowners from foreclosure;  tightening up the parole system and oversight of sex offenders; making it easier for people to donate life-saving bone marrow and organs; and fighting abuse of prescription narcotics.

Locally, DeSaulnier has championed the Expansion of Highway 4, BART to eastern Contra Costa County, and the development of a fourth bore of the Caldecott Tunnel.

For most of his career, DeSaulnier has been a small business owner of several successful Bay Area restaurants.  He has served the Bay Area in public office for more than 20 years.

DeSaulnier resides in Concord where he raised his two adult sons, Tristan and Tucker.  He is an avid runner and has completed twenty-one marathons.